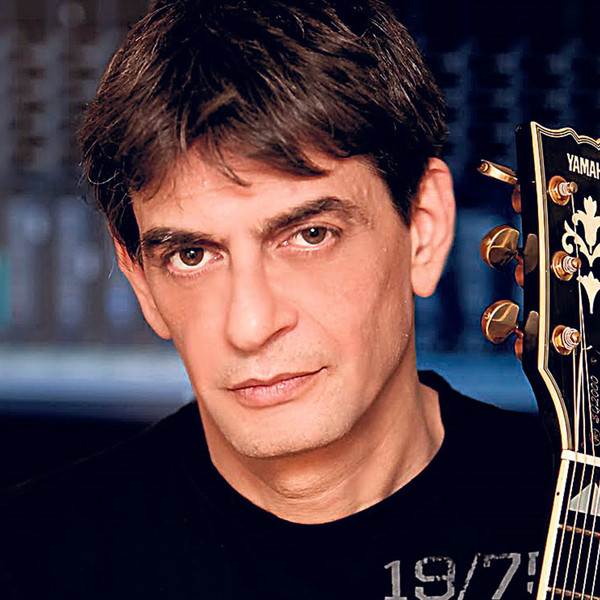 During 80’s he started a group called ‘Scraptown’, which released 3 records in English with reggae and funk music. Their song ‘Viva Sahara’ entered the European charts. After the breaking up of the group Mihalis Rakintzis starts his solo career in Greece. In 1987 he releases ‘Moro mou faltso’, a song which establishes him as one of the leading Greek pop musicians and he is considered one of those who changed the musical map of Greece.

Mihalis is immediately rocketed to the top of the charts, acquiring thousands of loyal funs. He breaks the frontiers of rock music crossing over to pop music and presenting new styles, electronic music and other music combinations from Western and Eastern cultures. In 1991 readers of the music magazine Popcorn vote him best singer of the year.

His success reaches its Zenith when he starts singing songs written by him or by Sophia Arvaniti. In 1993 he appears live with the legend of rock music Ian Gillan of Deep Purple. His recording with Ian Gillan and Bonnie Tyler also causes quite an impression.

Nowadays he composes songs for many famous Greek singers, combining successfully modern and popular music. He is also quite interested in computers. He was actually the first performer in Greece to use computers for composing music. In 2002 Mihalis was participated in Eurovision Song Contest in Tallinn. Mihalis describe his experience in Eurovision Song Contest as a useful one.

On July of 2003 the new double album of Mihalis Rakintzis finally released. It’s obvious through his songs that Mihalis is brand-new with loving, extra-beat tunes. New and old favourite songs into “SOLO” album it’s what makes the difference. Since then, Mihalis has released many cds and occupied with various music genres such as melodic hardstyle. He tried to introduce to the Greek audience the beauty of hardstyle tunes with his sight of view and performed successfully in a “hardstyle-project”, a series of concerts throughout Greece.

His latest album labeled “INSANE”, is a sophisticated combination of all his musical experience mixed together with a very charismatic way. Mihalis is unstoppable when it comes to music and he always be.